We live in a very materialistic world with selfish attitude. Humanity is diminishing from this world in the current state. What is humanity? Where is humanity? Let us find answers by viewing through the lens of a sad cow in Southern India whose tale would bring tears to our eyes. 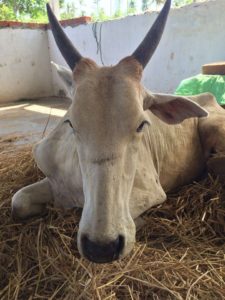 The main character of this tale is a cow named Subhadra (named after Hindu god Krishna’s sister) and her plight in the hands of humans. She used to live in a small town in Tamilnadu. She was owned by a farmer happily grazing on green grass and enjoying the village life. She was blessed with a handsome calf and life couldn’t be any better, until the day that changed their lives forever. On a sunny morning,the farmer had sold Subhadra to a person and little did she know that her new owner is a butcher who slaughters cows and sells cow meat in the market. She woke up to the reality of the situation and tried to escape but the butcher caught her and tied her to a rope and led her back to his place. She had spent that night with the calf after feeding him and the next morning, when the butcher untied her, she tried to run again. This time, the ruthless man attacked her, hit her hind legs with iron rods in the most inhumane way. Unable to run anymore, she collapsed to the ground, gave up the fight and was tied by ropes. She was left abandoned was left to starve for 3 days. Subhadra with her son Ranga

By divine intervention or with a little piece of good luck she was blessed with, a kind hearted gentleman who care for cows had rescued her. Just when she was about to give up on life again, a miracle happened and she was brought to Srirangam (the holy town of Lord Shri Ranganatha – a manifestation of Lord Vishnu) on Aadi amaavasya day (no moon day – considered auspicious in hindu tradition). She was able to smell the breath of fresh air of river Kollidam (a tributary of the famous river Cauvery) in the banks of Srirangam near Trichy at Sri Manavala Mamunigal Thiruvarasu – (Manavala Mamunigal is one of the ‘acharyan’ (or spiritual head) of the Srivaishnava (followers of Lord Vishnu). ‘Go Pals’ (Friends of cows) there in Srirangam noticed the plight of Subhadra, removed her shackles, gave her a bath, gave her blanket to keep her warm and gave her fresh water. They had also given her the beautiful name of Subhadra (from the character of Lord Krisha’s sister in the Hindu epic Mahabharatha) and gave a new meaning to her life and existence. 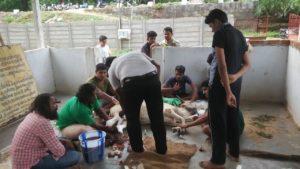 Subhadra being amputated and her hind legs removed. It wasn’t a scene to watch ! 🙁

Earlier that night, Subhadra slept peacefully in the mutt in such a posture that her head was on the feet of the Manavala Mamunikal statue which gave one of the best visions to folks there who could envision ‘Kamadhenu’ the holy manifestation of Lord Surabhi from Hindu puranas. The noble hearted folks in the Manavala mamuni premises had really chanted holy mantras/hyms to seek divine blessings to cure Subhadra and yet again reminding us that humanity is thriving in these hard times.

The next day morning, Subhadra was attended by a Veterinarian who recommended that it was best to amputate her legs to save her and after administering anesthesia to her, the amputation was complete and Subhadra woke up in 3 hrs to excruciating pain. She had to be force fed with bitter medicine/pain killer and was already missing her dear son (calf) who was missing for several days now. The noble folks also tried to get in touch with www.krishnalimb.com who were supposed to fly in in few days to Srirangam to arrange for an aritificial limb to Subhadra at no cost but somehow it didn’t materialize. 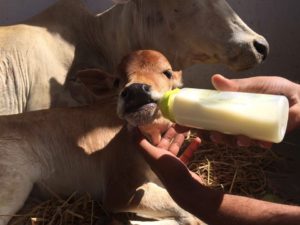 Ranga fed by a feeding bottle

As Subhadra’s condition was being monitored, she was reunited with her son (calf) through the noble efforts of Mannargudi Sri Chendalangara Jeeyar Swami who brought her calf home and named him Ranga. Subhadra’s joys knew no bounds and she was reunited with her lost son which gave her a great sense of relief and huge strength. But her medical condition made it impossible for her to generate milk to feed her son and it was the most pathetic situation folks had to witness where the calf was unable to feed from his mother (cow). They tried to feed the calf milk using various methods but he wouldn’t take it and finally they had to force feed him with a lovely bamboo spoon which was made specifically for her, which Ranga loved! This situation only prevailed for a few days as tragedy struck and our beloved dear Subhadra had passed away and finally got out of all her sufferings. Folks in the premises, where Subhadra and Ranga had spent the last few days, were speechless to see Ranga licking his mother’s body which lay lifeless. 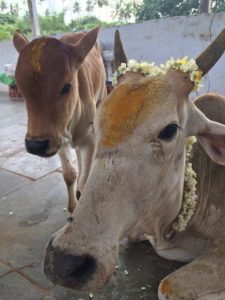 In summary, this tale still keeps us hopeful that humanity is not entirely dead in this world and we, humans are blessed with a mind to think and a heart to feel for living beings and can bring in changes to help save not just Subhadra or Ranga but save humanity from perishing from this earth. Be a ‘Go’Pal and and be a pal to all fellow beings, be it a human or an animal.

Some Facts About Us

120+ Cows Resuced
A forerunner in rescuing cows from slaughter houses and providing them with motherly care.
25 Cows at Goshala
At present, we manage to take care of around 25 cows at our very own shelter.
Local Self Sustained Supply Chain
We help in facilitating in-patient facility at our cow care centre and have a network of other Go Shaalas to provide timely and immediate help.
Unequaled Call-Center facility
Our call-center like network offer online assistance, clarifying any doubts with respect to the livestock.With our contacts, reaching out to the nearest Go Shaalas isn’t much of a task.

CHANGE THEIR WORLD. CHANGE YOURS. THIS CHANGES EVERYTHING.

DONATE FOR A CAUSE OrCONTACT US